I recently acquired this 4 piece piece pressed penny set on a trip to Indiana Caverns in Corydon, IN. Images include the underground boat ride, cave bacon, a salamander, and an ice age fossil.

Indiana Caverns is home to a fun cave tour that includes an underground boat ride.  Along the way, you will get to check out a 4 story underground waterfall, unique formations, and bones from animals that lived during the ice age.

The cave tour was fun and informative.  It lasts about an hour and a half.  You walk for about 30 minutes, take a 30 minute boat ride, then walk another 30 minutes.  It was interesting learning about how the cave was discovered and seeing the unique formations.

Although we only did the cave tour on this trip, there is so much more to do and see at Indiana Caverns.  They have a zip coaster, escape rooms, and gemstone mining.  You could easily spend most of the day there.

To learn more about planning a visit to Indiana Caverns, visit their website.

While you are here, be sure to check out the rest of the cave pressed pennies in our collection

This elongated penny depicts the underground boat ride that you take at the midpoint of the cave tour.  The boats each hold 18 passengers and the ride lasts about a half an hour.

This elongated penny depicts animal bones from the ice age that were discovered within the cave.

You will get to see several examples of ice age bones during the cave tour.  Our guide pointed out bones from the fisher, peccary, bison, and black bear.

This elongated penny depicts the cave bacon formation that can be found in Indiana Caverns.

We got to see several examples of cave bacon during our tour.  It looks remarkably like bacon with the light shining through it!

This pressed penny depicts a cave salamander that can be found in Indiana Caverns.  We didn’t see any during our tour, but we did see blind cave crayfish.

Reverse Side on the Indiana Caverns Smashed Pennies

All of the pressed penny designs at Indiana Caverns are mules, which means they also have a design on the reverse side.  On the back side is the website, the town and state, and their phone number.

Machine Location:  The Indiana Caverns pressed penny machine is located in their gift shop.  It’s just inside the entrance to the right.

While you are in the area, you might also enjoy getting the pressed pennies at Marengo Cave.

Other cave pressed penny designs that might interest you… 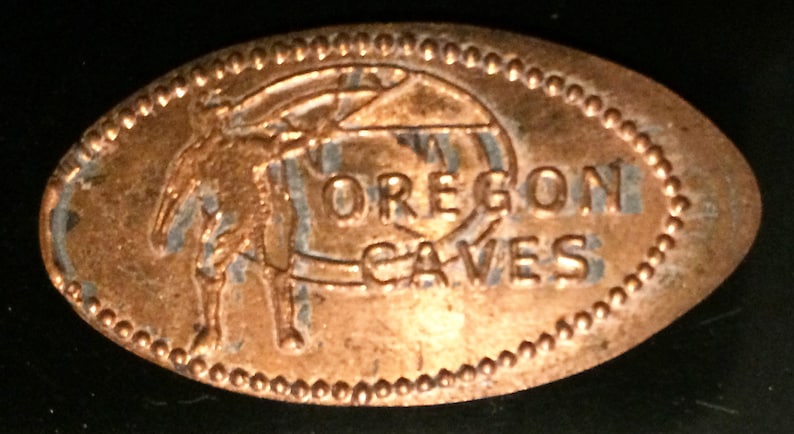 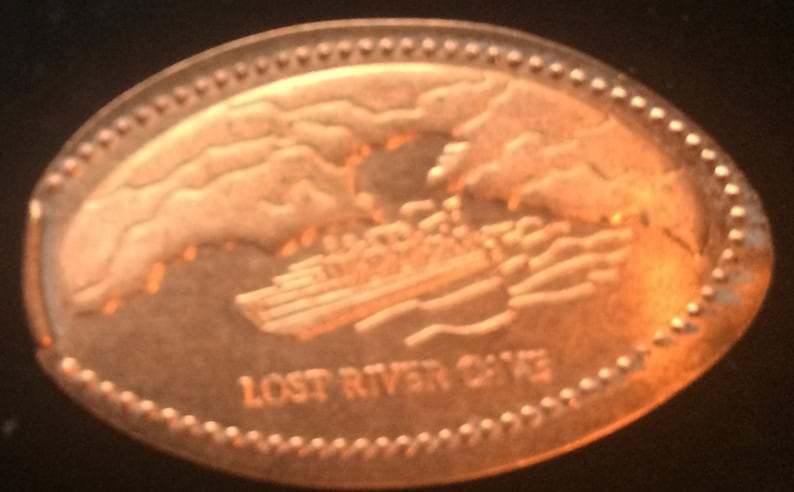 Jump to a section...

While you are here, be sure to check out the rest of the Indiana pressed pennies in my collection.

If you have any updates on this machine location or the pressed penny designs at Indiana Caverns, be sure to leave a comment below so we can update this post.

Until next time, keep on squishin!

★ ★ ★ Are you a member of TEC - The Elongated Collectors? ★ ★ ★ It's a great club with an informative quarterly newsletter. Each issue contains several new elongated coins for your collection! I highly recommend joining! Want to sign up? Click here to be taken to a printable membership form. Or you can sign-up online at TECNews.org. Just make sure to write that Jennifer Voss, TEC Member #3899 referred you.

Pressed Penny Museum participates in the Amazon Associates program as well as other affiliate programs (like Etsy and Share a Sale). The links on this site may be affiliate links. This means that we earn a small percentage of any sales generated from these links. This helps to support this website. If posts are sponsored or if a complimentary product has been received for review, it will be stated at the beginning of the post.